All Master Masons are Welcome to Visit

Friends and Family are Welcome

Find us on Facebook: Phoenix Lodge No. 8, AF&AM of North Carolina

Edmund Pendleton Gaines was made a Freemason in Phoenix Lodge early in his life.  From 1796-1797 he was stationed with United States troops near Averasboro in Cumberland County.  Business often led him to Fayetteville, and among the kind of hospitable spirits that guided over the lodge, he formed intimacies and friendships that but expired with their lives.

In the early 19th century, Gaines surveyed routes and boundaries in the Mississippi including parts of the Natchez Trace. In 1807, Gaines was the commandant of Fort Stoddert. During this time, he arrested Aaron Burr at Wakefield, Alabama and testified at his trial. Gaines also surveyed the route that would become the portion of the Gaines Trace from the Tennessee River to Cotton Gin Port, Mississippi. He afterwards took a leave of absence from the army to practice law.

The War of 1812 brought Gaines back to the army and was appointed Major of the Eighth US Infantry and in July, 1812, was made a Lieutenant Colonel in the Twenty-Fourth U.S. Infantry. In 1813, he was promoted to Colonel and commanded the Twenty-Fifth Infantry with distinction at the Battle of Crysler's Farm. He became Adjutant General and was with General William Henry Harrison's army at the Battle of the Thames. He was promoted Brigadier General of regulars on March 9, 1814 and commanded the post at Fort Erie after the U.S. capture. General Jacob Brown was wounded at the Battle of Lundy's Lane and when the U.S. Army of the Niagara returned to the fort, command was passed to Gaines.

At the Siege of Fort Erie Gaines was in command on the fortifications on 15 August 1814, when a British assault was bloodily repulsed. For this victory - the First Battle of Fort Erie - Gaines was awarded the Thanks of Congress, a Congresssional Gold Medal (outranking a Congressional Medal of Honor, according to the Smithsonian), and a brevet promotion to Major General.

General Gaines was seriously wounded by artillery fire and General Brown, having recovered, returned to command. Gaines' wound ended his active field career for the rest of the war, and he was given command of the Military District Number 6.

At the end of the war, Gaines was sent as commissioner to deal with the Creek Indians. The U.S. commanding general, Jacob Brown, died in 1828; and Gaines was one of two ranking generals who could have been considered for the post. However, he and the other general, Winfield Scott, had both publicly quarreled with each other, and Alexander Macomb was promoted over both of them. He commanded the Western Military Department during the Black Hawk War. He was still in command of the department during the Seminole Wars in which he personally led an expedition. At the Battle of Ouithlacoochie he was wounded in the mouth.

In 1830, Gaines opposed President Andrew Jackson's policy of Indian removal. On February 20, 1836, Gaines and his men were the first U.S. soldiers to revisit the scene of the Dade Massacre, where they identified and interred the bodies.

In 1836, he was placed in command of the Southwest Military District. He was given instructions to fortify the border of the Louisiana Territory and Texas in the case that the Mexican Army army might threaten U.S. territory. He was also given orders to post guards preventing any U.S. soldiers from crossing into Texas and fighting in the rebellion. He was in command of the Army's Western Division at the outbreak of the Mexican -American War. He was reprimanded by the U.S. government for overstepping his authority by calling up Louisiana volunteers for Zachary Taylor's army. He nevertheless called up volunteers from other southwestern states and received a court-martial but was able to successfully defend himself.

In the years during and following the Mexican-American War, Gaines was in command of a series of military districts. He was in command of the Western Division when he died at New Orleans, Louisiana on June 6, 1849. He was interred in the Church Street Graveyard in Mobile, Alabama.

A number of places in the United States were named in his honor, including Gainesvilles in Florida, Texas, and Georgia; Gaines Township in Michigan; and Gainesboro in Tennessee. He was also the namesake of Gaines Streets in Tallahassee, Florida, and Davenport, Iowa; and Fort Gaines, a historic fort on Dauphin Island, Alabama. 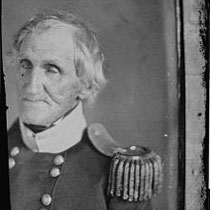 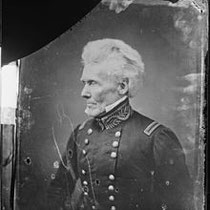